Today was quite uneventful. It felt a lot like saying goodbye to the person I love.

It’s night and I walked the length of the beach alone. I waded in the waters, stopped for a while and looked up. I saw the most amazing stars this island could offer. I smiled. I remember the nights I watched the stars with him, also in a beach. I was saying goodbye to all those memories.

I remember that time in Tagaytay when I saw the girl with you in that photo. You were in the shower. I contemplated packing up hurriedly and leaving. Instead I walked out the door and tread the highway of Magallanes in freezing air, trying to stop myself from crying. I was walking and you found me. You were carrying our valuables because you had to leave our hotel door unlocked since I took the keys. You saw me and walked towards me. You suddenly bursted, “what are you doing?!” I said, “nothing” while clutching the sleeves of my jacket, controlling myself. You sighed loudly and huffed off. I followed slowly and was just about to reach our room when I heard our room door slam. I entered the room and you were lying down on the bed watching TV. I put down the room keys at the side table. I took a shower, and complained about not having hot water when I got out. You asked about it. We were civil.

I lied down on the bed and tried watching TV. Rush Hour 2 was on. You were watching me and after a while asked what was going on. Eventually, I told you. You said nothing happened between you and the girl. It was when I told you I’m not going to see you again and you were here, on the same island I’m in now when you met the girl. I believed it but I doubted that nothing happened.

I look up the stars and wish that I could let go.

This feeling is just all too familiar. It feels a lot like emptiness.

I love my smile. And I love smiles. I love how smiles can brighten one’s day even if it’s just from a random person or someone who has a crush on you. It makes you feel good about yourself and it makes the day more tolerable and less terrible. I love my smile and I love how it brightens people’s day. What words cannot describe, smiles are a tool to say something you can’t say through words.

It’s official. I really hate shopping for gifts. I don’t even know if I should give something to some of the people there when they’re my ex-boss.

And yes, I’m not worried they will see this because I didn’t publicize this blog for them lol 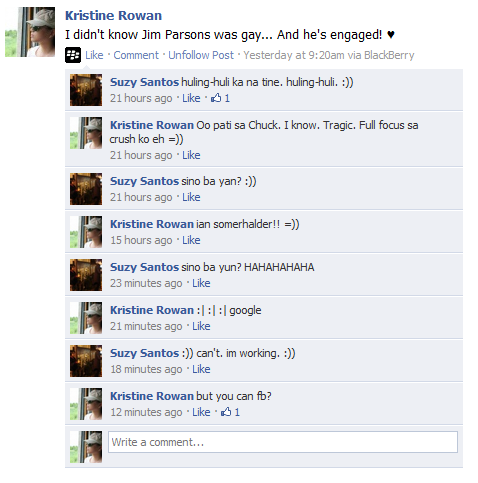 I love how easy it is to make me smile. I admit that there’s a big difference between being happy and smiling. “Happiness” has varying degrees for me and the term, “happy” is way over there at the top of the scale. Nevertheless, I love easy it is to make me smile – like whenever I see the white doves flying around outside the window of my office, or a brown canary tapping on the window, or the sudden drizzle.

I love how calm I am despite the pressure and the chaos around me. Most people they would get cranky or would rather have their heads blown off. Sometimes I wish that as well. Pushing that aside, because of my calm attitude, I’m the go to person of my friends. Being calm in general is good as it means not being stressed out as much.

I love my love for travel. I learn more, explore and meet new people. I know a lot of people that do not want to travel unless with they’re family, or people who just stay at home. I love how travel opens my eyes and I can see and experience places firsthand. Not a lot of people has the luxury to do that.

I’ve been really excited to write my bucket list for 2012. First time to write a bucket list just for the year so I’m excited!